Success, Smiles and Surprises at the Dressler Bursary Awards

SMILES ALL AROUND is the only way to describe this happy scene beneath our new MARIE DRESSLER WAY sign on Dressler House lawn on Saturday July 19th, 2014.

Each student received a one thousand dollar cheque from Miller or Houston while photographers "snapped" and family and Foundation members, including John and Alma Draper provided the applause.

To our surprised delight Bradley Ace Martinez, An Award of Excellence Winner, at St. Mary's Secondary School, serenaded the gathering by playing his guitar (photo below) and singing a song of his own composition. Martinez, a teen "whose life is music" spoke of his plans to attend Metal Works Institute in Toronto where he can broaden his already comprehensive experience in musical creativity and performance. Bradley supported his high school activities by running light and sound boards and provided musical entertainment for events at the Columbus Community Centre. 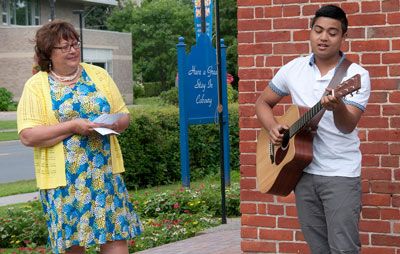 Next right Amanda Stuckless, Cobourg District Collegiate West, is enrolled in Graphic Design at Durham College where she wishes to turn her childhood passion for creating pictorial stories into corporate, editorial and advertising design. Amanda worked at Dollarama to learn merchandising skills and gather funds to meet college costs. As well, Amanda's Co-op placement at Beyond Signs and Design allowed her a taste of dealing with customers and their needs in creative media.

Mandy-Jo Stoneman is the first graduate of Continuing Individual Studies, Cobourg, to receive a Dressler Foundation Award. Mandy-Jo surprised us by announcing that she was celebrating her 29th birthday with her twin sister, Sara, by her side enjoying the presentation. To overcome her nervousness Mandy-Jo read an account of her scattered education. Following the birth of her son Mandy-Jo realized the need for a high school graduation diploma. At CIS she achieved high marks and, as well, worked as a waitress. Both sisters are attending Durham College in September, 2014 where Mandy-Jo is enrolled in Library and Information Technology.

Sarah Jenkins, Cobourg District Collegiate West, is already an athlete and instructor in water sports. Sarah is accepted at Ryerson University where she will study Sports Media and Film. Writing and broadcasting sports should be a fine career for her and we look forward to her success in a field Sarah enjoys. Sarah maintained her Honour Roll status while balancing athletic activities and employment. Sarah has younger twin sisters who will soon be off to college. In order to reduce the financial burden on her family, Sarah plans to meet her own higher education costs and sees the Dressler Bursary as a generous gift. 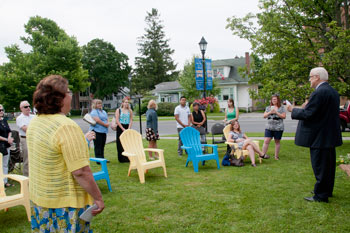 Before the awards, MDF Treasurer, William Patchett (at right), reminded us that the beautiful and historic Dressler House stands today due to the efforts of citizen volunteers, Cobourg Chamber of Commerce and the Town of Cobourg.Â Cathie Houston spoke of the Vintage Film Festival and its efforts to raise funds for the bursaries.

When Margaret Baily, Bursary Committee, presented flowers to the person with the birth date nearest to November 9th Dressler's birth date, another surprise came to light. Susan (Tessier) Dessadleers, grandmother of Sarah Jenkins, revealed how she had worked at The Dressler House Restaurant as a teenager and gathered fresh mint leaves for the salads of diners who considered Dressler House "a destination" on Highway 2 between Toronto and Montreal. 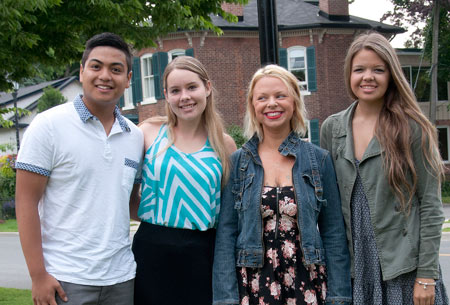 Delphine Patchett, Honorary Chair MDF and Founding Member of the original Cobourg Film Festival, closed the ceremony by congratulating the students and thanking our members and guests for their support.

Success is naturally the goal of our young people who stand on the Dressler House lawn this morning. Even the talented Marie Dressler did not attain this reward overnight or even in a decade. From 1893 until 1927 when talking pictures arrived, Dressler enjoyed some success on the New York stage and in silent films. Dressler's career was threatened when she was blacklisted by theatre owners for leading a strike on behalf of chorus girls. However, Dressler held to her dream and received a Hollywood Best Actress Oscar for MIN AND BILL (1930-31) and enjoyed world-wide fame for TUGBOAT ANNIE (1933).

Good luck to our Dressler Foundation winners Amanda, Bradley, Mandy-Jo and Sarah who are starting from that very same Cobourg lawn!