Hours
Due to COVID-19 health and safety protocols, the museum will be open by appointment only.

Visit the new museum's website here for details of how to book your visit.

On July 7, 2018, bursaries of $1500 each were presented to the four winning students. The photo below is of the four students and the video shows the presentation by Rick Miller (chair of the Foundation) and other board members.  The first winner in the video is Graham Beer – many will note that he is generally on the other side of the camera.  Witnessing the event were Foundation board members, parents of recipients, the media and a couple of guests visiting from Victoria.  Originally residents of Cobourg, Pam Jackson and Pat Archer helped in the original collection of artifacts for the Museum.

The Marie Dressler Foundation Board believes that it’s fitting that Cobourg celebrates its heritage and in particular the Cobourg born star Marie Dressler, by awarding these bursaries.

Note that the awards for the first three are based on merit and the fact that they are planning tertiary studies in the performing arts but Sydney’s award was also for exceptional community devotion.  That award is called the Bill Patchett Devotion to Community Award to honour the community service by Bill Patchett. 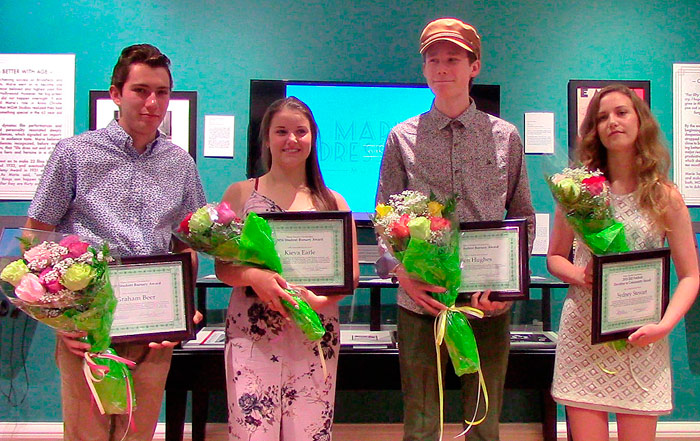 Graham is passionate about broadcast and television journalism. Graham has explored this passion from when he was quite young, As Executive Producer of Cobourg Media, Graham has focused his efforts on promoting and sharing current events in and around Cobourg. In fact, in many cases, Graham has "scooped" the traditional media sources with his "on the scene" reporting.

And for fun events, Graham has produced Cobourg Media Christmas Specials for the past four years.

As Prime Minister of Cobourg Collegiate Institute's Student Council, Graham leads the school community and promotes a diversity of school events while he has been active in theatre productions, school sports teams, and many community service initiatives while achieving first class honours.

Graham is a winner of Merit Awards for Enterpreneurship Business and also for Communications Technology.

Graham is enrolled in RTA Media Production at Ryerson University.

She has been an active performer in music theatre, notably as the lead Maria in the school's production of "The Sound of Music" as well as impressive roles with Northumberland Players and set and stage design. Kieva is active in not only performing in choirs, and with S.O.N.G., but also helping with the mentoring of younger members.

Kieva is also an accomplished athlete in many sports, and is particularly successful in wrestling where she has achieved high standings at the provincial and national levels.

Along with Kieva achieving the highest academic average among the grade 12 students at St. Mary's Catholic Secondary School, she is also enrolled in the school's Arts & Culture Specialist High Skills Major program which provides students with an excellent foundation for pursuing further education in the Arts and Culture sector.

Kieva is enrolled in Bishops University in Music and Secondary Education.

Ben's passions are film and music.

Ben is an accomplished musician and he has performed in major productions at his school, most notably in AIDA. He had one of his own written plays selected for a night show performance at his school, with him directing the production.

At East Northumberland Secondary School, as a BAM (Buddies and Mentors) leader, Ben provides support to incoming Grade 9 students as a mentor and positive role model and is considered a true leader.

Ben is an Honour Role student and has already achieved two College credits in writing for the screen. Ben's aspiration is to become a film director.

Ben is enrolled in Ryerson University for the Image Arts: Film Studies Program.

Recipient of the "2018 Bill Patchett Devotion to Community Award".

As an accomplished young artist and volunteer elementary school art instructor, Sydney believes that the arts have a strong positive impact on mental health. She plans to go into art therapy or teaching art as a career.

At Cobourg Collegiate Institute, Sydney has achieved 100% in every visual arts course she has taken - a stunning achievement. Her artwork has been featured and rewarded in many art shows and competitions.

Sydney exemplifies the spirit of Cobourg philanthropist Bill Patchett in her dedication to volunteering. As a social activist, Sydney is committed to helping others.

Sydney has been a valued volunteer for many organizations such as Northumberland Hills Hospital Foundation Youth Cares Committee, various CCI teams, Habitat for Humanity, Rebound Child & Youth Services, Cornerstone and many other charitable organizations. She is also a mentor for the Kawartha Pine Ridge District School Board's KP Arts Camp.

Sydney is an exceptional student and recently she was recognized by the Loran Scholars' Foundation who placed her among the top 10% of young people in Canada.

Sydney is enrolled in Huron University College at the University of Western Ontario in Psychology and Visual Arts.