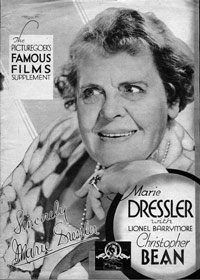 In 1933, the last Marie Dressler movie Christopher Bean was released. Also starring Lionel Barrymore it was not her greatest film but is remembered as her last.

One of the British Movie magazines of the time was "The PICTUREGOER" and they published a supplement primarily about this movie and Marie Dressler. She was at her peak - and the writers  have an obvious affection and admiration for her.

Due to a kind gift from Harlow McAuley, the Marie Dressler Foundation has a copy of this supplement and the highlights are reproduced in the articles listed below.

Not all the contents are reproduced here and due to the difference in media,  it is not in a format identical to the original.