When Marie carried a movie by herself, the results were spectacular. So why MGM insisted on putting her in partner movies with Wallace Beery and Polly Moran is a bit mysterious. Marie didn't like Beery as a person, but then from everything I've read, he wasn't particularly likable. In fact, most paint him as a real son of a bitch - loud, impatient, and belittling. But they do play off each other marvelously; the two old troupers evoking so much life experience when they are on screen together.

Marie and Beery formed such an indelible impression in the early 1930s that they are often listed as among the screen's all-time great duos. But they only made two movies together as a true team, Min and Bill and Tugboat Annie. If Marie came to symbolize endurance against breadlines and foreclosures, she and Beery together doubled the impact.

Marie spoke kindly of Polly Moran, but she did come to chafe at the rather uninspired comedies the two of them were given. Their first co-starring talkie, Caught Short, is unavailable, but Reducing, Politics, and Prosperity are all silly and entertaining. In the book I suggest they are good time-capsule movies, especially Prosperity, which deals with the Depression head-on in its plot.

It's true that Moran did not become a big star, and in fact struggled to maintain a career after Marie died. When I see them together, I'm automatically drawn to Marie, who knew every trick of upstaging. Moran's comedy is broad like Marie's, but she lacks Marie's edge of sweetness and show of humanity. Marie could be self-deprecating, bellicose, tender, cutting, goofy, and sentimental in the space of one sentence. Moran simply didn't have that range.

What was Marie Dressler's relationship with MGM head Louis B. Mayer like? Who chose her MGM vehicles? 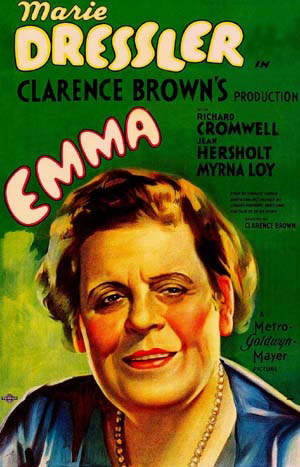 Marie was always gracious to Mayer in public, and was deeply grateful for his support of her career. He was one of the architects of her success, and she knew it. But behind closed doors she complained that she wasn't being paid what she was worth, and that Mayer could be stranglingly possessive.

Mayer absolutely loved Marie in that paternalistic way he loved his favorite contractees. He once declared that the three greatest actors he ever worked with were Garbo, Spencer Tracy, and Marie. Not only was she hugely talented and profitable for MGM, but her difficult behavior earlier in her career was gone - so that the latter-day Marie was highly cooperative. She was also a delightful party guest, amusing governors, presidents, and other dignitaries passing through Hollywood. She was a guest in Franklin and Eleanor Roosevelt's White House, and was part of the William Randolph Hearst/San Simeon party crowd. No wonder Mayer loved her so much.

Irving Thalberg, with Frances Marion's input, made most of the creative decisions that directly affected Marie's career, while Mayer would order another fast, cheap, and profitable Polly Moran comedy whenever MGM was feeling the pinch of the Depression.

Marie was especially close to studio publicist Howard Strickling. In fact, she gave him her Academy Award for Min and Bill when she knew she was dying of cancer.

Some reviewers have complained that Marie Dressler didn't act. They say she overacted. What do you think?

She played the charwoman or the grand dame with equal distinction. And she played to the camera as if it were the back row of a vaudeville theater, mugging and overreacting shamelessly. But because she was so good at it, and so experienced, it became who she was as an actress. It's Marie and her character becoming one. And behind all that mugging is someone so warm, so funny, and so human, that she makes a beeline straight to your heart. Call it overacting, but it's hard to deny her entertainment value, even today. Once you see Marie Dressler on the screen, you don't forget her!

The 1933 all-star Dinner at Eight is probably Marie Dressler's best-remembered film. How did filming go? Was it well received at the time? 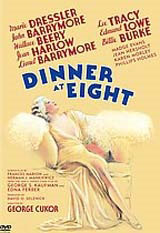 Dinner at Eight was filmed on a very tight schedule, since it involved some of the biggest names at the studio in an ensemble, and they were all needed on other sets as well. This is one of George Cukor's first movies as a director, and he was masterful at working with Marie, John and Lionel Barrymore, Jean Harlow, Wallace Beery, Lee Tracy, and Billie Burke. Reportedly, there were no raging egos, and everyone was happy with their roles and performances.

Dinner at Eight was received extremely well both critically and commercially. It was a direct descendant of the newly defined ensemble movie that MGM perfected the year before with Grand Hotel. As enduring entertainment, I think Dinner at Eight edges out Grand Hotel. It is creaky in parts, but most of it is still so funny and wise.

Marie's down-on-her-luck actress Carlotta, the twittering of Billie Burke, the boudoir sparring of Harlow and Beery - this is classic American film comedy at its very best. And of course there's the exchange between Marie and Harlow that has a secure place among the great moments ever captured on film. Something about machinery taking the place of every profession…

Marie Dressler's last movie was The Late Christopher Bean. Considering that it's an MGM film - currently owned by Time Warner - why is it unavailable?

I believe it has to do with the estate of the play's author, Sidney Howard. I'm happy to say that the film survives, and we can only hope that it will be seen someday on Turner Classic Movies and elsewhere. I went to the Eastman House in Rochester to see it. It's not Marie's best, but it is a pleasing slice of Americana co-starring Lionel Barrymore and Beulah Bondi. Marie was very ill during production, but you'd never know it. She is fine, bringing both humor and nostalgic wistfulness to her character.

Marie Dressler and Claire Du Brey. Were they really lovers? Did you go through Du Brey's papers? (I believe actor John Phillip Law is in possession of them.)

Ah, the lesbian love question! I talked with Mr. Law, and met with the actress Sierra Pecheur, who knew Du Brey and shared portions of her writing. But Du Brey is problematic as a source. First of all, Marie was dying of cancer during much of the time the two were together. Du Brey wrote exacting details on medical treatments, surgeries, and recoveries, but her papers are of no help on the subject of a sexual relationship, which is consistent with an era of discretion.

Marie was old (by 1930s standards), overweight, and mortally sick - not exactly the formula for a sex life of any kind. It was all she could do to keep her energy up for the camera and her fans. Du Brey felt that Marie was working and partying herself to death, and in 1932, they had a falling out that was never reconciled. Du Brey later sued Marie's estate, claiming she was owed back pay for her services as Marie's nurse. So, you see, her accounts come with conflicting motives.

This is where biography writing gets tricky. The two were emotionally intimate, no question of that. They lived and traveled together for a time. But there is also the question of identity. Even if they had sexual relations, both had been married to men. And they were together at a time when being an overt lesbian was unthinkable for someone of Marie's fame. And some of the posthumous rumors are just crazy, such as the one about Marie and Garbo being lovers. Please.

As a writer, I try to juggle professional accomplishments with the more private, and sometimes salacious, aspects of a life. Distinguishing between the plausible, the verifiable, and the outlandish isn't always easy. I know you faced even greater challenges of this sort with Ramon Novarro. And when the lurid takes on mythic proportions, as it did with Novarro's murder, the challenges are huge. You met them beautifully, by the way.

My impression of Marie is that she loved men and women. Whether that love was sexual is unclear. She made a living out of being unsexy, and that must have affected her romantic options as well as her self-esteem in matters of the heart. So I regret, André, that this brings me to the unsatisfying answer of "I don't know."

Marie Dressler died at the height of her fame. I know you don't have a crystal ball, but do you have any idea as to where Dressler's career was headed? Did MGM have more starring roles lined up for her?

Very good question, André, since Marie went out on top and in demand. I trace what might have been in the book. MGM was ready to work her like a pack mule, and there is every reason to believe that she would have continued being hugely popular had she lived longer. Columbia wanted her for Lady for a Day [May Robson got the role and an Academy Award nomination in 1933] and Paramount wanted her for A Son Comes Home [made with Mary Boland in 1936]. MGM was developing something called "Mrs. Van Kleek" for her, and wanted to team her with Marion Davies for "Paid to Laugh."

Marie and Harlow made such an impression together in Dinner at Eight, that Mayer was putting together a movie to highlight the two of them. MGM tried to get W. C. Fields on loan from Paramount to star with Marie. And Marie and Will Rogers formed a mutual admiration society. One newspaper planted a story that they were to be teamed for a film version of Eugene O'Neill's Ah, Wilderness!. [Dressler's would-be role is probably the one that went to Aline MacMahon in the 1935 MGM version.]

And finally, were there any roles that Marie Dressler wanted to play but didn't get a chance to do? Did she have a favorite among her roles? 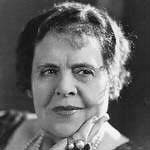 It seemed to me that Marie most loved the role she just finished. The fact that her career in talkies was cut short by cancer is truly sad, for we can only imagine the performances and partnerships that would have made her career even more memorable. I can so easily imagine her in The Women, directed by her friend George Cukor. And with sensitive direction, she would have been a magnificent Ma Joad, or Ma Kettle, or Mother Courage.

Thanks so much for letting me ponder Marie again, André. It's been a few years since the book came out, and it's a lot of fun to look at her again. What a woman!

There is more about Matthew Kennedy's book at his web site here: http://www.matthewkennedybooks.com/dressler.html