To save the family from embarrassment, Leila now called herself Marie Dressler after an aunt. As Marie Dressler, her first role with the Nevada Company was as a cigarette girl in "Under Two Flags." She recalls that the actors had little time to learn parts, and were often judged on their skill in ad libbing. Dressler, in summarizing the way plays were produced at that time, notes that "If they [actors] had a sketchy outline of the plot and a rough idea of the characterization, a troupe of old hands could almost create a play as they went along."

Then suddenly, the Nevada Company was stranded in Michigan without funds. Our would-be star, without money or a job, had little choice but to walk the railroad ties from Edmore to Saginaw to rejoin her family. What a disappointment for a youngster with a dream of a future on the stage! Yet there had been value in the experience of performing with professional actors. She had learned how much work and dedication would be necessary if she were to succeed.

Dressler was not about to abandon her dream. She then joined the Robert Grau Opera Company as a chorus member earning eight dollars a week. When the leading lady, Agnes Halleck, broke her ankle, Dressler was asked to take the role of Katisha in "The Mikado." This comedic role was a very desirable one which Dressler enjoyed playing with great success. It is interesting to note that the actress played this famous role seventy-six times in her stage career.

Dressler's road to success was not to be an easy one. She always insisted on being paid regularly. Finally Grau became annoyed at her pestering and sent her to Philadelphia where he said there was a job for her. There was no job in Philadelphia. Dressler had been tricked. Determinedly she consulted a newspaper, and found that the Starr Opera Company was in town. She begged for a job, and with the help of two actresses who had known her on the road, the manager, Mr. Deshon, outraged at the way she had been treated, gave her an audition, and a job.

With the Starr Opera Company, Dressler played several comic operas including "Chimes of Normandy," "The Mikado," "The Baron," and "The Three Cloaks." The youngster must have done well for her salary was raised from eight to eighteen dollars a week. The company played long runs in Philadelphia and Detroit. The actress saw that these audiences were more sophisticated, and expected a higher quality of performance. In this way, she was challenged to improve her acting skills.

Dressler next performed with the Bennet-Moulton Opera Company with George A. Baker, manager and director. This company played week-long stands in towns and small cities. During this period, Dressler played thirty-eight roles from prima donnas to old women, and even royalty. Dressler explains why she was often the queen, and sometimes, even the king:

Because our ermine robes were designed for a giantess and because I was the tallest woman in the company, I often played royalty. As a general thing I played the queen. But if the king had spent too much time propped against a local bar, I was given his beard and his lines.

While Dressler was beginning to get wide experiences on the stage, it was as "Barbara", in "The Black Hussars," that she received the first chance to gain rapport with the audience. While other royal roles had been ones of distance and reserve, it was with the character, Barbara!; that she began to perfect her natural flair for the comedic stage business. Once she knocked a baseball into the audience, which to her surprise, brought a great response. 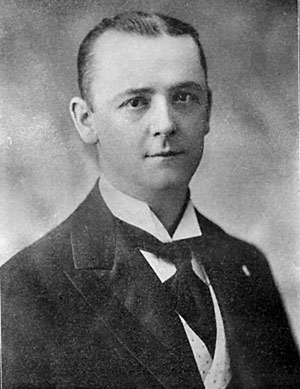 Eddie FoyIn her next role as the lead in "La Perichole," the actress had the opportunity to play a young girl who was given too much wine by a gentleman with ulterior motives. Her character became a little bit tight, a little bit tough, a little saucy, but still very fetching. Thus under the tutelage of the demanding George Baker, Dressler learned how to create appealing characterizations. I suggest that Dressler's ability to play characters which were comical and yet human enough to gain one's sympathy was the key element to her success on stage and in the movies.

Having watched Eddie Foy, a top comedian of that day, perform in Chicago, Dressler decided that as Foy had continual trouble looking for his props, she would never use a property of any sort. Once she had made this decision, Dressler could develop routines that left her free to move about on stage and to improvise. Pieces of her costume became her trademark in comedy. Since the comedienne designed and made all her own costumes, she could use the latest fad in fashion to create an outrageous dress. On one occasion she learned that twirling her hat gave the audience a laugh. She comments, "Audiences don't laugh because they want to, but because they can't help it. It takes years of study and thought to learn how to demand that laugh."

Following her meeting with Eddie Foy, Dressler went on the road in "The Tar and The Tartar," and luckily she was hired as a replacement for the lead role after the show had gone into production. This show took her to New York. She had been on the road for nine years, and now in 1892, she had finally reached the "Great White Way."