Dressler's film career began as a result of the success of the play, "Tillie's Nightmare." Mack Sennet, another Canadian, and the creator of the Keystone Kops, had seen the comedy and decided to make a movie from the story. The film, "Tillie's Punctured Romance," caught the public's fancy and paid off the producers very well. Dressler, however, shows badly in the film. Three more films followed but none platforms from which Dressler could spring into feature films. From 1918 until 1927 she did not make any films.

Dressler was at a loss, and began to talk about opening a restaurant in Paris for American guests. A friend, who was also a Manhattan astrologist, advised her to stay in America. The seer, Nella Webb, predicted that Dressler would have "seven fat years" which would begin on January 17, 1927. And sure enough, on January 17, 1927 - as the August 1933 issue of Time reports - movie director, Allan Dwan, telephoned to offer a film role.

Dressler was once again on the silver screen. At this time she came under contract with Metro-Goldwyn-Mayer. A recent biography of Louis B. Mayer (footnote2) - tells how this very powerful movie magnate felt about Dressler:

Mayer adored Dressler: of all the stars at the studio, he liked her the best...(for) her great feistiness, good humour and charm...He was determined to build her as a motion picture star, seeing the warmth and strength within her that he believed the public would respond to. He was convinced that sexual attractiveness and physical beauty were not essential to stardom...Miss Dressler became one of his very few actor friends, and he learned from her earthy but morally elevated wisdom. He always gave her top billing; towards the end of her life, he would refer to her as "the equal of my own mother" the ultimate compliment. 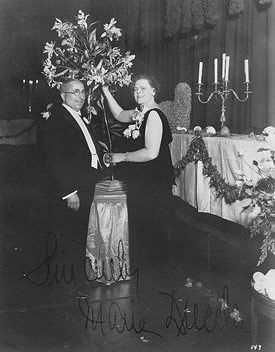 Despite Mayer's efforts on Dressler's behalf, a most disappointing situation developed. Dressler was under contract to play with comedienne Polly Moran in "The Callahans and the Murphys," a tale of feuding, Irish families in the New York slums. The public loved the outrageous antics of Dressler and Moran. However, when the movie opened at the Lexington Theatre in Manhattan, "the largely Hibernian audience screamed with rage and beat and tore at the screen with their bare hands. Police were called in, aiming hoses at the crowd and ruining many of the seats." M.G.M. was forced to withdraw the movie. Whether the film was destroyed or not I do not know. It is possible that someday someone will find a copy of "The Calahans and The Murphys," and Dressler fans will be able to see for themselves what the fuss was all about. In 1927 this occurrence certainly stymied Dressler.

Friends of Dressler's wrote a script for a "talkie" entitled "Dangerous Females." This two-reel comedy is still considered by many to be hilariously funny. Certainly the popularity of this short film brought Dressler the chance to play in five more films in 1928-29. Her value as box-office draw was on the rise. Her chance to show her versatility came in "The Vagabond Lover" which was meant to showcase bandleader, Rudy Vallee. Vallee was weak and Dressler, who was playing a society lady with a broad sense of humour "sparked the otherwise dull movie," showing that she could still keep the patrons laughing.

When Dressler had been a great stage star, other forces were at work on her behalf. On one occasion she had granted an interview to a cub reporter, Frances Marion, of the Hearst newspapers, thus giving Marion a career boost. Now Marion was one of the scenarists with M.G.M. who also wished to help the aging star. Marion knew that the sensational Greta Garbo was going to speak for the first time in the film, "Anna Christie." Marion expanded Dressler's role as the waterfront hag, Marthy, in this Eugene O'Neil play. Dressler practically ran away with the show in spite of Garbo's playing the title role. This was a pivotal situation. Dressler's career took fire. In 1930 she made six more pictures, one of which would bring her the Best Actress award for that year. Between 1927 and 1933, she appeared in twenty-two films. In 1933 Dressler starred in "Dinner at Eight," still considered a classic today along with "Christopher Bean" and "Tugboat Annie."

Many of you may have seen "Tugboat Annie" and laughed at Dressler's antics as Annie Brennon, the captain of the Narcissus. However, the reality of Dressler's life was far from a laughing matter as Mayer's biographer reveals:

Mayer's fondness for Marie Dressler continued during that exhausting spring. She was on her way to shooting "Tugboat Annie" in Seattle...when she spotted from the window of her chauffeur-driven limousine a small, pretty cottage, saying to Howard Strickling who accompanied her that she would like to own it. Mayer immediately offered its owners twice as much as it was worth to vacate, and they did so: he had it moved to Santa Barbara for her to live in. He knew that she had only a short time to live; her suffering from cancer was agonizing for him, and he wanted her to be as happy as possible. She gave one of her finest performances in the picture [Tugboat Annie], which became one of M.G.M.'s greatest successes to date.

Yes, Dressler finally reached stardom! As Min in "Min and Bill" she portrays a very timely role of a boarding house keeper who sacrifices her scant savings to send the girl she is raising to a private school in the hope that the youngster will have a better life. When the young woman marries someone of wealth and status, Min deprives herself of the opportunity to enjoy the girl's wedding. It is with the solemn face of a loving parent watching from the crowd that Dressler, as Min, walks into lasting fame of the movie world. This was the Great Depression, and Dressler represented all the parents who were sacrificing so that their sons and daughters would have a better tomorrow.

Although Dressler died on July 28, 1934, her image lives on in her many films. This year [1997] two biographies are to be published. Dressler fans can even hope that a movie of her life might follow. But who would play the lead? As Frank Capra, one very successful Hollywood director, perceptively comments, "There is only one Marie Dressler."